A Generator for my Mother’s Well Being 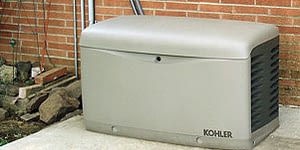 A Generator for my Mother’s Well Being

Not everyone buys a Kohler home generator just to provide power during an extended outage. Sometimes, assuring your family’s safety and well-being requires keeping the whole house functioning even through a relatively short power loss.

We spoke with Ed Gunderman of Morrilton, Arkansas, about why he switched from a portable generator to a Kohler home generator.

Q: When we think of Arkansas and Oklahoma, we think of tornados and ice storms. Wasn’t there a massive ice storm that shut down Arkansas about ten years ago?

Gunderman: Yes — we seem to have our fair share of extreme weather! We’ve had some ice storms that caused outages the last few winters, including a pretty bad one in 2009. But, yes, the really big one was back in 2000.

We had already had a major winter storm the week before, but then on Christmas day we got hit with a storm that coated everything here and in the western part of Arkansas with up to three inches of ice. FEMA relief couldn’t even get in here for two days because the Little Rock airport was closed.

The National Guard was using Humvees as ambulances. So many lines were down the governor was talking to some parts of the state by HAM radio. It was the worst natural disaster in state history. Most of us were out of power for days. Some people in Arkansas didn’t have power for two weeks or more!

Q: Did you get a Kohler generator because of the ice storms?

Gunderman: Not really. The Kohler is for my mother who lives on her own. She’s developed Alzheimer’s over the last couple of years, and in January we had a short power outage — some lines blew down.

I visit her often to help her out but that day she was home by herself, and she was just sitting in the dark, and it kind of freaked her out. Me, too.

Anything like that that’s out of the ordinary really affects her. And she’s been even more fragile that way since we lost my father last September. Anything like a passing is difficult and stressful, and it seems like maybe that accelerates Alzheimer’s.

It certainly didn’t help. Anyway, with him being gone, she’s home alone, and having a whole-house generator that automatically comes on is a good solution. No more worries about dragging out the portable, hooking things up, and all those oil changes.

Q: How long did you use a portable generator?

Gunderman: Four years I think, and it doesn’t have a lot of hours on it. It worked but was only 8000 watts so it could only power essentials like the fridge and lights — no heat or AC or anything like that. And you had to make sure you had fresh gas on hand.

Now with the Kohler, it’s permanently installed, set up on natural gas and is fully automatic — 10 seconds after an outage, you’ve got whole house power. You can run anything.

Q:We understand you had an installation issue?

Gunderman: I did. We’re pretty rural here so I bought from an online retailer and had my local electrician install it. That seemed to go OK but then a few days later the battery had drained. I had a guy come out who checked the setup on a schematic on his laptop, and he said it might be missing a trickle charger.

So I called Kohler customer service and they know their stuff: I learned that my electrician must have had an older schematic — my model has an integrated trickle charger. Kohler had me contact my local dealer in Bryant, Arkansas, about an hour away. They checked it out, remedied the problem and put it in warranty for me. Really good service!

Q: Why did you choose a Kohler?

Gunderman: A Kohler is Made in America — pride in U.S.A. quality! One dealer I talked to said that the Kohler was like buying the latest technology, like a new Cadillac instead of an old car.

Since I got the Kohler, my neighbor who’s remodeling his home just ordered one, too. He wants the same peace of mind like I want for my mother.